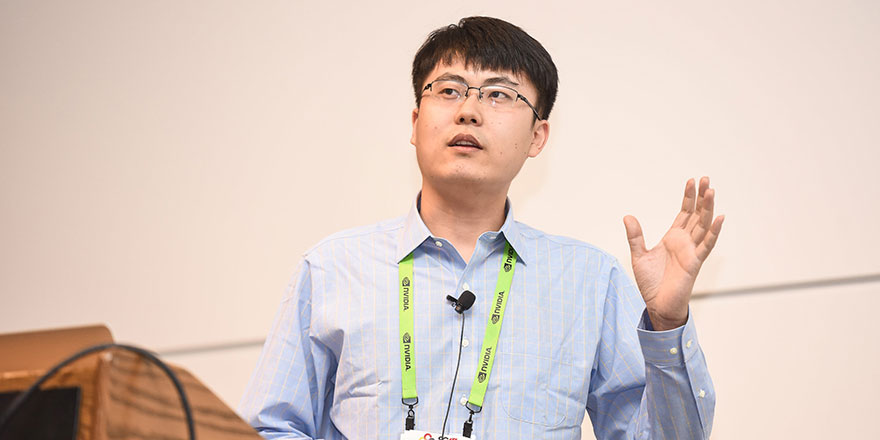 Dr. Lin Gan is an SC conference success story on repeat. In 2016, he was part of the 12-person team awarded the Gordon Bell Prize for developing a solver used to understand fluid dynamics created specifically for improving weather simulations.1 Their solver could successfully scale the entire Chinese-built Sunway TaihuLight system, the fastest supercomputer in the world at that time. The following year, Gan was part of another team—this time focused on porting and scaling the popular Community Atmosphere Model across TaihuLight to achieve petascale performance2—which was among the finalists for the SC17 Gordon Bell Prize. Last September, Gan, who currently is an assistant researcher with Tsinghua University’s Department of Computer Science and Technology and assistant director of the R&D Center at China’s National Supercomputing Center in Wuxi (where TaihuLight “lives”), was one of three scientists awarded the IEEE-CS Technical Consortium on High Performance Computing (TCHPC) Early Career Researchers Award for Excellence in High Performance Computing. As a highly awarded young researcher who already has been acknowledged for “outstanding, influential, and potentially long-lasting contributions” in HPC, it seemed fitting to get his perspective about what piques his interest about future supercomputers and what it means to say, “HPC Is Now.”

Charity: What are you working on right now? How is HPC an integral part of your research?

Charity: Because of the complexities involved with climate modeling applications, such as those featured in your Gordon-Bell-nominated work, how will improved HPC systems drive future breakthroughs in that field?

Gan: Numerical climate modeling is one of the most complicated applications for HPC, and it will continue to be more complicated. But, HPC systems never stop improving themselves from all sides. On one hand, efficient and user-friendly HPC software and tools are emerging, greatly facilitating the programming and optimizations. On the other hand, novel techniques, such as high-performance deep learning platforms, have enriched the solutions in climate research. Better performance and finer resolution in climate simulation will be achieved thanks to these innovations in HPC.

Charity: What does working on some of the most advanced HPC systems in the world, such as TaihuLight, mean to you as a researcher?

Gan: It is very exciting, but also comes with a lot of responsibilities. Sunway TaihuLight is the first system with a performance of over 100 Pflops and with lots of architectural breakthroughs. We are always eager to make use of the huge computing power with these sophisticated and novel techniques and to make contributions to challenging problems that have not yet been solved.

Gan: Based on my experiences and understandings, I would be happy to see future systems be more flexible and tolerable on the hardware level. That way, users can customize their own systems with different architectures as they require, e.g., CPU-GPU, CPU-FPGA, Power-GPU, etc. Numerical simulations, such as climate modeling, will always be impacted by power and performance as complicated algorithms and data patterns sometimes greatly lower the efficiency and, therefore, waste lots of the computing power.

Gan: I think, more than ever, we are expecting a better world, and now is the right time to let HPC better serve and benefit everyone, especially by using these cutting-edge technologies and ideas, such as artificial intelligence.