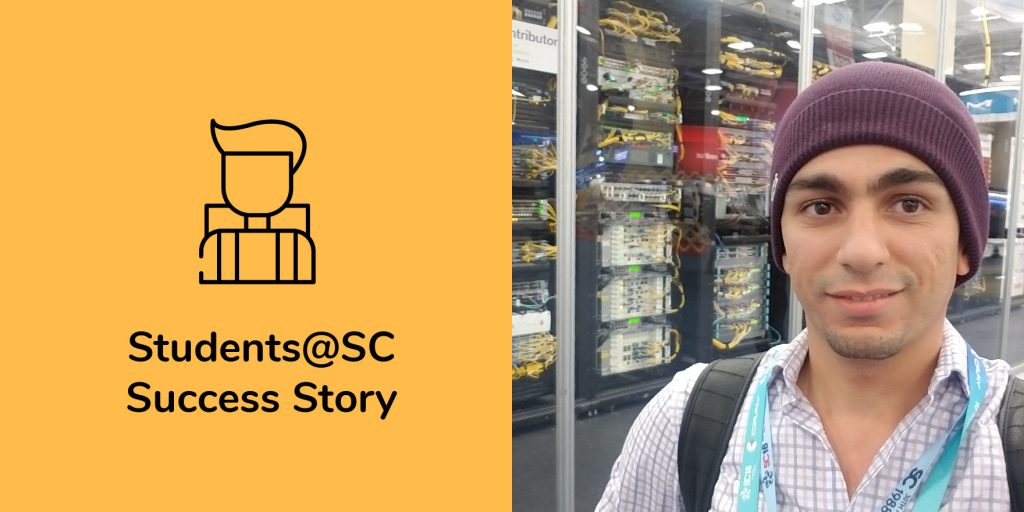 Hussein Al-Azzawi, a network and storage specialist and doctorate student at The University of New Mexico, has been an SC conference attendee every year since 2014. In 2018, he applied to become a student volunteer for the first time and was accepted into the SCinet program, where participated in the Fiber, Wide-Area Network (WAN) and Routing teams. As a volunteer, what Hussein found most surprising was the interaction between everyone, especially people he long admired for their professional accomplishments and considered “unreachable.” In looking back at his SC18 experience, Hussein recounted a few events that truly stood out.

Running with the SC18 General Chair

Every year after setup week, SC organizes a 5K run, and Hussein chose to do it. During the run, he found himself chatting with another volunteer about the event, staging and things to come. After a couple of kilometers, Hussein asked his running partner about what he was doing at the conference and discovered he had been keeping pace with the SC18 Chair, Ralph McEldowney. Hussein noted he was startled by McEldowney’s open, easy-going and humble nature.

Working with the Latest Technology

Another memorable effort happened during the program set-up.

“Working at the North Texas GigaPOP was like a dream,” Hussein said. “Some of the equipment there was not even released to the public and not available yet in the high-tech market. I was able to watch the WAN team members working on this equipment while in production. I also understood how much work this event entailed. Sometimes, vendors couldn’t meet our deadline, and we had to find alternative solutions on the spot.”

Hussein got to work closely with JJ Jamison, the CTO for governmental accounts at Juniper Networks. Juniper donated new switches that were still being tested, and Hussein was amazed as he watched Jamison “troubleshooting the switch, laying on the floor with his tech support guys on the phone—unbelievable.”

Hussein admitted he “never thought a CTO would do things like that.” This instance comforted him as he likes the hands-on part of Information Technology. Then, right there in front of him at SC, Hussein saw that even as you climb the corporate ladder, you can still troubleshoot.

“SC brings together a wide variety of people, from different backgrounds, ethnicities, work experience, objectives and ages, and there are no barriers placed between any of these,” he noted. “People spoke freely, worked intellectually and physically together. I had never seen that anywhere before.”

Meeting “Superstars” During the Mentor–Protégé Dinner

Hussein also participated in the SC Mentor–Protégé Program and attended the official dinner. At the dinner, tables were displayed with topics of interest and featured representatives from U.S. national laboratories and private vendors. Students were encouraged to go table to table to meet with, as Hussein called them, “superstars” (“نجوم”). Hussein met a recruiting agent for a national laboratory and continues to be in contact with her via LinkedIn. He also met Eli Dart, a network engineer with ESnet, and used their time to talk about education and what kinds of openings would be available to someone like him. During this conversation, Dart shared how he became what he is today and emphasized the difference between education and knowledge.

“It was like visiting with a celebrity,” Hussein said.

Hussein also bumped into a professional who happened to have shared the same co-advisor. That man has become an example of who Hussein aspires to be. Prior to the SC18 conference, Hussein had doubts about his career path. When he left, he had a very positive outlook toward the future, as well as a pocketful of professional contacts he once thought were inaccessible. That engagement alone with so many “superstars” assured that Hussein would volunteer again for SCinet 2019.

“I feel like I am not doing something wrong, I know it is possible now, and I also believe I am on the right path,” he added.

Opportunities Await for Students at SC

Inspired by Hussein’s story? Learn how you can apply to be a student volunteer and the many other opportunities available to students through the Students@SC program.