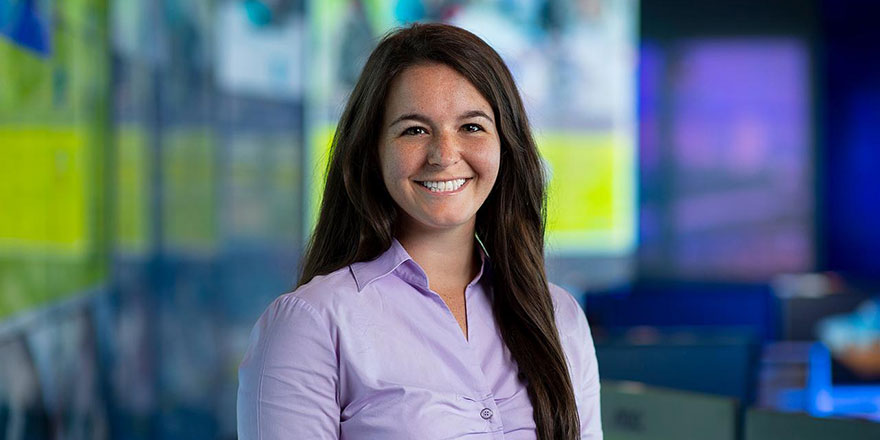 Traveling to the SC10 conference in New Orleans made quite an impression on Christine Harvey – it was the first time she had ever flown on a plane. Her university had received an award which they used to send four students to the conference’s Education Program and Harvey was selected to participate.

Since then, she has continued to participate every year, starting out as an attendee and taking on a greater role each year, and serving as a member of the conference planning committee since SC15. For SC19, she will again be in charge of outreach for student programs and will then chair the Students@SC program at SC20.

Clearly, she enjoys helping students connect with the conference program and attendees, just as she did at her first conference. At SC11, Harvey was a student volunteer herself, and again at SC12 when she was a SCinet student volunteer, spending two weeks doing manual labor like laying miles of fiber.

“I learned a lot and got to meet a lot of people,” says Harvey, who works as the Lead High Performance & Analytic Computing Engineer at MITRE Corp. near Washington, D.C. “One of the most valuable parts for me was meeting all the smart people in HPC and then being able to contact them if I had questions.”

She was just as enthusiastic in the weeks leading up to SC18, where she chaired the Student Volunteers programs.

“Student Volunteers chair is one of the best parts of the program and it was a huge deal for me,” says Harvey. “It was really cool to be part of helping 160 student volunteers at SC18.”

“I think my work with the conference has helped me out promotion-wise as I was selected to lead one of our programs. Between the skills learned and the dedication involved, it reflects well on you and your organization, which can help when it comes to moving up to more responsibilities and more leadership roles.” – Christine Harvey

Over the years, her contributions to the conference have increased, while her professional life has also taken wing.

In 2013, she participated in the final year of the Broader Engagement program and continued to meet people. For SC14, she was invited to join a panel discussing careers and interviews. She was well prepared, having landed her job at MITRE in January 2013 and earning her master’s degree five months later.

Since SC15, Harvey has done outreach for SC’s student programs, first launching social media efforts to recruit students for the conference, then traveling to universities and other conferences to let students know about the opportunities available through SC.

“It’s really a lot of fun and I think it helps the students to see a face connected with the program,” she said. As part of her outreach, she also recruited two teams to participate in the Student Cluster Competition.

“It’s been really good for me as I’ve learned management and leadership skills,” Harvey says. “I’ve had to recruit students, work with other people, and coordinate a lot of moving parts.”

Between her work and SC volunteer efforts, she is also finding time to pursue a PhD; she says the volunteering part is well worth the time it takes.

“I think my work with the conference has helped me out promotion-wise as I was selected to lead one of our programs,” Harvey says. “Between the skills learned and the dedication involved, it reflects well on you and your organization, which can help when it comes to moving up to more responsibilities and more leadership roles.”

Jon Bashor is a respected leader within the HPC community. He is recently retired from Berkeley Lab after an esteemed 27 years of service to national labs.